Illustrations: 2 in total. You can get 1 out of 2 in a single play through. The illustration depends on outfit.

Fairy/Auntie: in the garden. You can find her after you have stayed two times late at school. If you follow the guide I will also mention it at the moment you should be able to find her. You will get sunglasses. 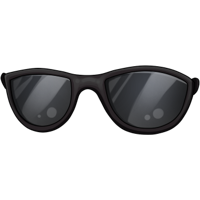 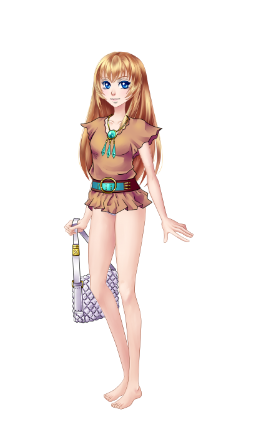 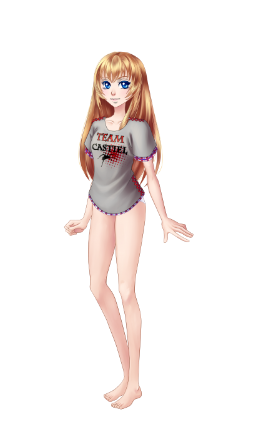 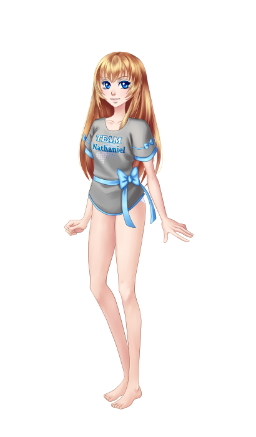 You start this episode in the hallway. A new teacher (Mr. Faraize) will show up. You have to show him around the school.

After showing the teacher around, you see Amber.

Amber: Oh, here you are! Great timing, we’re going to eat lunch in a restaurant today, but Charlotte forgot to bring money. You can help us out, can’t you?

Nathaniel: What, are you Serious?

Nathaniel: I’m really sorry, she can be really difficult at times, at home too lately….maybe I can reimburse what she took.

A. I can’t believe it! Did you know that Amber stole money off me? –
B. Phew, finally done showing that teacher around the school. +
C. Amber is a real jerk! –

Castiel: I know, I know, you already told me…

Nathaniel: Not yet, I haven’t had time.

Rosalya: Hey, watch where you are going!

Iris: I don’t know…Do you really think that would solve the problem?

A. Not necessarily anything really mean… +
B. Yes and no, I don’t care, I just want her to pay a little for her behavior. –

Castiel: Say little lassie, do you have any pocket money for me too?

A. Not really… /
B. Say! Since Amber wants to go out with you, maybe we could work out a plan together? /

A. Mmm… You could ask her to go out with you, and then you shame her in front of everyone. –
B. Mmm… We could take a picture together and give it to her afterwards? –
C. Mmm… And if you did deliberately to embrace it?! –

Iris: Well, since fashion is so important to Amber, I’m sure it would bother her if you came to school wearing the same clothes that she wore. You should try it.

You decide to dress up as Amber.

But the trick does not work you go looking for a new idea.

Castiel: I don’t know, I haven’t given it any thought….

A. Come on, pleeease. –
B. I’m sure a delinquent like yourself have a couple ideas! –
C. Not even a little idea? /

A. Ok, I have to find some way to get back at you sister. /
B. Ok, I want to get revenge on your sister. –
C. Ok, do you want to help me give your sister her retribution? –

Nathaniel: You want to get revenge? Isn’t it a bit daft to act just like her?

A. I want it to be worse than what she does! /
B. It’s ok, hang on! Nothing that bad. –
C. Well apparently the administration won’t do anything, so I’m going to take care of it myself. –

Iris: Did you try it?

A. I did it but it just made me stand out, she hardly even flinched. /
B. Yeah, your idea wasn’t so great, it did nothing but make me stand out. –

Castiel: With your fingers?

Nathaniel: I finally talked to Amber.

Nathaniel: Ah…She took it badly and told me that if I did that, she’d tell our parents that I pick on her in school.

Nathaniel: Yes apparently…..But I’m surprised at my sister though, I didn’t think she was like that at school, I should have listened to you before.

Nathaniel: You’re talking about your little revenge, aren’t you? What exactly do you want?

A. To get her kicked out of school! –
B. A couple of clues, something she doesn’t particularly like… /
C. To make her suffer! –

Nathaniel: She has always been scared to death of spiders, you might be able to use that?

A. You’re telling me I should go and find…spiders? Yuck –
B. But I’m afraid of spiders too! /
C. What am I supposed to do with spiders? –

You decide to put spiders in Amber’s locker and spray it with graffiti. You can buy both in the dollar shop. When you start spraying the graffiti, Li sees you and tries to stop you. At that moment the principal sees you both. Li and you get punishment; you have to clean the staircase after school.

Nathaniel: (Nickname) The principal just told me that you were being punished because she caught you graffiting a locker with Li?!

A. Yes, it’s your fault, It took me too long to put those spiders in her locker and I got caught. –
B. Yes, Li saw me, she got involved and we both got punished /
C. Yeah…it all falls on me, and this is the first time I’ve done anything… –

Nathaniel: I told you that it was a bad idea to do that kind of thing.

Castiel: You did it in the daytime? Are you stupid or what?

A. I’m sorry I don’t have your expertise in the matter! –
B. You could have warned me if you thought it was a bad idea! –
C. Well yeah… It’s done now, I’m punished and now I have to clean the graffiti. /

Castiel: Do you really think I’d know? I don’t get caught doing things like that.

The school day is over, you have to clean the graffiti. For cleaning it, you just click on it. Then something strange happens; a ghost appeared. Li and you run both home. The next day starts.

Nathaniel: Oh, yeah you were here after school….So what did you see?

A. Yeah it was so scary! I was in the staircases with Li, just about ready to leave and we heard this noise and then we saw this shadow! And…we ran away. –
B. Yes, like a scream, then this large shadow appeared! /
C. I think so, anyway I don’t know if it was a ghost, but we saw this human shaped shadow appear. /

Nathaniel: It must have been your imagination I think.

Nathaniel: Why do you want to investigate this? You really believe in ghosts?

A. Yes I’m sure they exist. /
B. Maybe? In any case there was someone or something here at night. /

Castiel: Are you going to tell me your big news or what?

Castiel: You are so gullible sometimes! Of course not, ghosts don’t exist little girl.

You have to go to the staircase to find some proof that maybe a ghost exists. 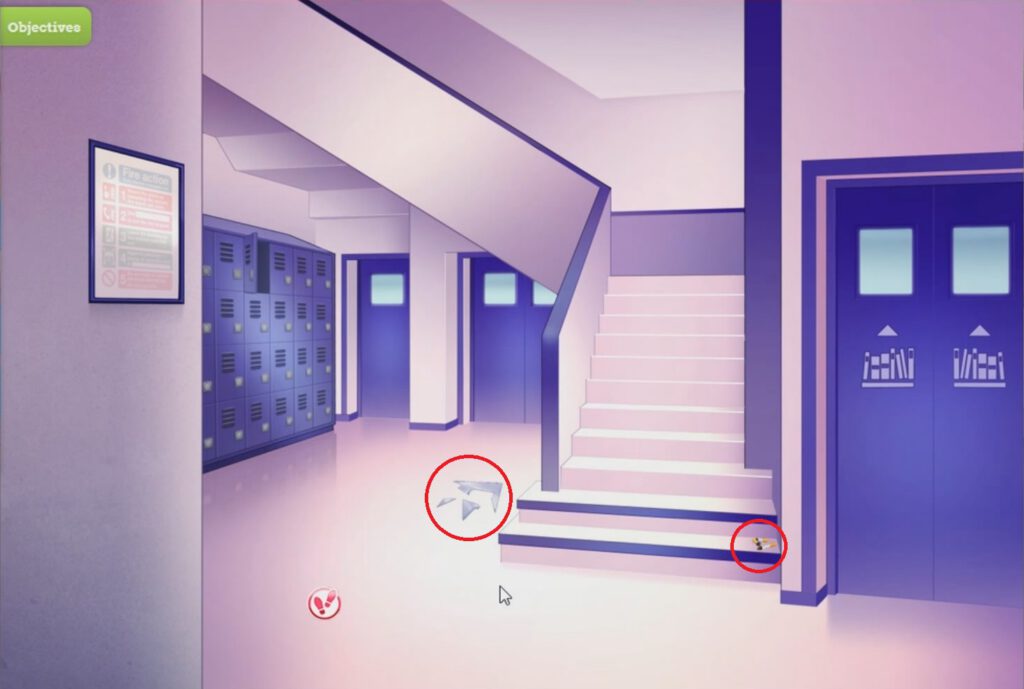 Nathaniel: Some bits of plastic and some cigarette butts? That doesn’t prove anything at all.

Castiel: And so? Ghosts eat plastic and smoke now, is that it?

A. Are you going to stop making fun of me or what?! –
B. Someone was smoking there. /

You stay late at school again to see the ghost. First go to the student council room to talk with Nathaniel. Then go to the staircase. When you hear a noise, you run home again. The next day starts. Walk around the school, you can find the fairy in the garden.

Castiel: Hmmm…I’d be surprised if you saw anything at all.

Nathaniel: You saw what again?

A. You know very well what I’m talking about! –
B. The ghost, it appeared again! –
C. Well actually, I heard the same noise, but I didn’t see anything…. /

You have to go to the staircase to find some proof that someone was there. 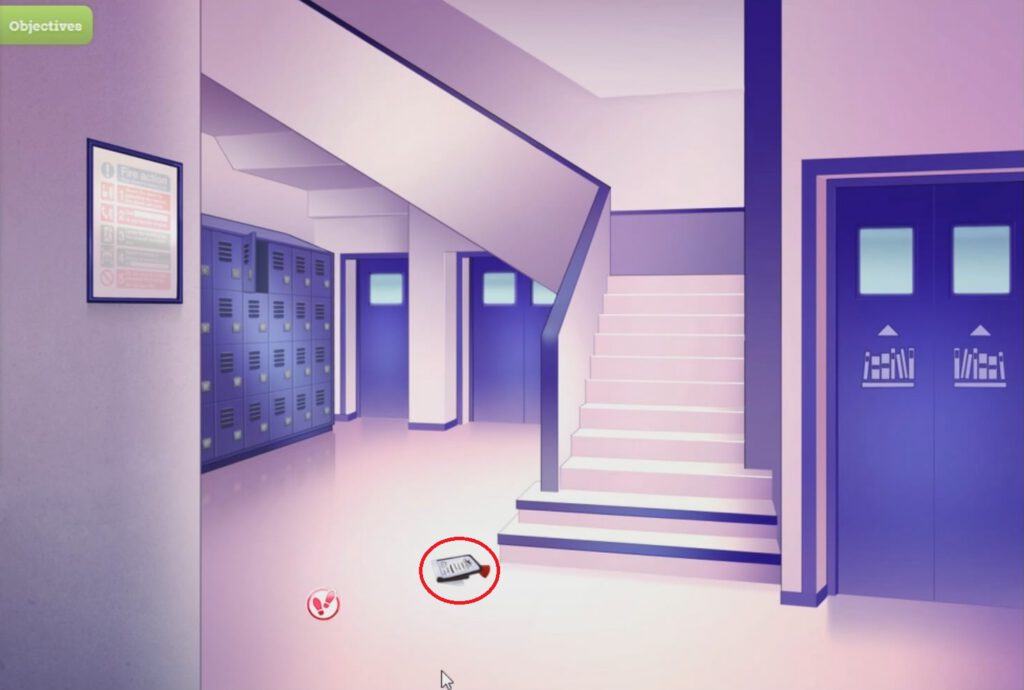 Castiel: You don’t know what this is?

A. Something made of plastic. –
B. A piece of jewelry. –
C. Something for the guitar. +

Nathaniel: But someone could have lost it in the beginning of the day today. I’ll take them if you want, in case someone comes and claim them.

You will see Nathaniel and Castiel talking to each other. You think that they are something hiding for you.
You decide to buy a camera, so that you have proof if you see something tonight. You can find the camera in the Dollar shop.

Castiel: Well yeah, that can happen.

A. You’re hiding something from me, I’m positive!
B. What were you talking about?
C. Not with you two, you hate him. /

A. I saw you with Castiel earlier on! /
B. What are you hiding from me?
C. Come on, admit everything!

Nathaniel: You must have confused me with someone else.

Nathaniel: Ok, all right, yes we were talking. It can happen on the rare occasion.

You are going to stay late at school again. Go to the staircase. You see something and take picture of it.
Then outfit option comes.

You will see Nathaniel or Castiel depending on who has the highest LOM. He will explain that a band is practicing at that hour of the school. He will introduce you to Lysander. Lysander was the one that scared you away the other night. Then Nathaniel or Castiel takes you home. End of the episode.