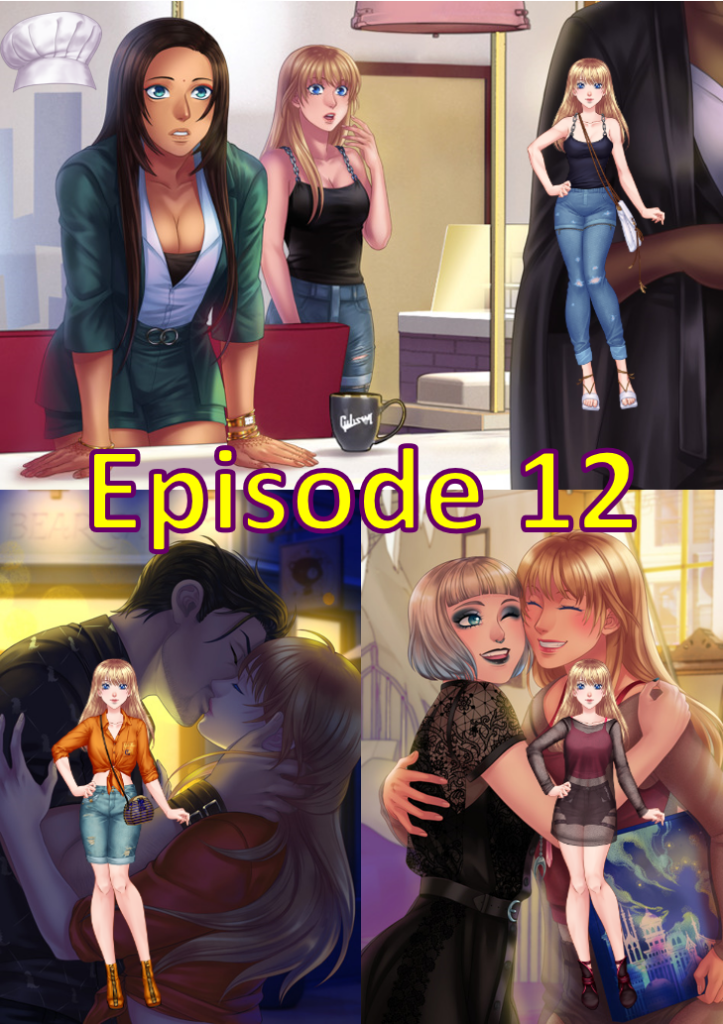 Special thanks to Melodyalanaroster and someone amazing.

Illustrations: 3 in total. You can get one out of three in a single play through. The illustrations depends on dialogue choice, outfit and LOM.

Fairy/Auntie: in the kitchen. You can find her when you are leaving the café to go to the studio for the private party. She will give you a chef’s hat. 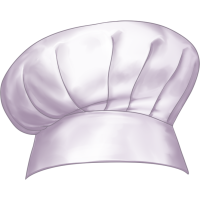 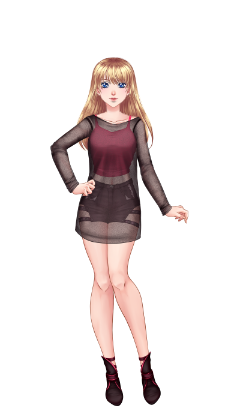 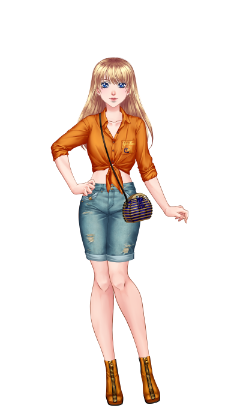 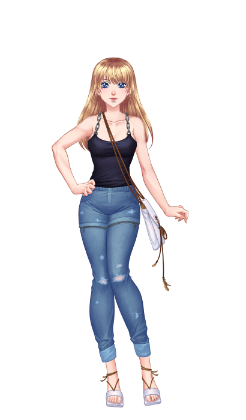 You start this episode in front of the café. You are talking with Nina.

A. Probably your best so far! I must admit I’m pleasantly surprised. –
B. Do you mind taking care of the posters to inform the customers? / or +

Go back inside the café. There you will have a phone call from Chani.

Go to the kitchen. There you will choose your outfit.

Then go to Chani’s place. You get there to go in front of Sweet Amoris. Marina is also there.

Marina: Sorry… It’s complicated. But the fact is that Mr. Zaidi doesn’t deserve what’s happening to him.

A. I knew it! You made it all up, is that it? Do you realize the harm that… / with Marina and – with Chani
B. Meaning? I got the impression he had taken advantage of his position as far as you were concerned. You shouldn’t feel guilty, you know… / with Marina and Chani
C. I’m not sure I understand… I thought… that bit about being summoned to his office… / with Marina and + with Chani

Marina: And I got the impression that not only he understood but… that he didn’t dislike it. (Only on Rayan’s route)

A. I’m not going to lie to you, it’s kind of hurtful for me. But fortunately, I can see how you came to believe that. +
B. And the fact that he was in a relationship, and that you knew it, you never took that into account? –

Marina: And I got the impression that not only he understood but… that he didn’t dislike it.

A. And you never noticed, ever, that he’s like that with everyone? –
B. Hmm… I think I see what you mean. He has never had a very good sense of distance… or of rules. +

Marina: I’m really sorry. (Nickname), I know I don’t deserve your forgiveness but…

Marina: I’m really sorry. (Nickname), I know I don’t deserve your forgiveness but… (Only on Rayan’s route)

Marina: Some of them are still involved in legal proceedings…

A. Well, you should have thought of that before starting the whole process, don’t you think? –
B. Sure, I see what you mean. You ended up trapped in your own lies… +

Chani: Obviously, you’re not obliged to. But it would be really kind of you. (For Chani’s illustration you just have to go to the law firm, that’s why you can get it with the content of both A and C)

A. (No… It’s better to let Priya be the first. I guess he’ll be told really soon.) /or + with Priya (You don’t call Rayan)
B. (Still, I’m not going to let him stew another day, considering how stressed out he must be.) + with Rayan and – with Priya (You call Rayan, this part cost 30AP)

Then you go back to the café.

Eric: May the person who’s never had a real crush cast the first stone…

A. No… even from that angle, I still don’t get it. /
B. You’re like that? I didn’t think you were such a romantic. –
C. Oh… I see that you are a hopeless romantic, too. I’ve always liked playing the romantic card, too. +

A. All losers… That sums it up well. I really blame Marina a lot for not having been a little firmer. / or +
B. Right… That’s exactly the case. All losers. You can add Marina to the list, too. You should’ve seen her… –

A. It’s wild to see the consequences of something that in the end was nothing more than the passing fancy of a young girl who got overwhelmed by events… / or +
B. I hope Marina will suffer the consequences of what she did. It’s really big-time serious. –

Priya: Something wrong? You look weird… Almost as if you were having trouble breathing…

A. Er yes… I’m pretty much OK. But today I found out something… Listen up… Maybe you’d better sit down. / or + with Priya and – with Marina(Another choice with Priya)
B. Er, no, of course not… I don’t know what makes you think that… – with Priya and + with Marina

Priya: (Choice) (If you choose the content of A in the last choice)

A. You have to admit, you and Renata didn’t really give her a choice, if I have a clear picture of what happened.
B. Miss Paltry and you may have set things in motion a little too fast for her to have time to realize what was really going to happen. / or +

Rayan: And she totally instrumentalized Marina while she was at it.

A. Yes, well, the so-called instrument could’ve stopped everything by being clear when it mattered, huh… –
B. It’s true that, deep down, the real guilty party isn’t necessarily the one people think./ or +

Nathaniel: Do you know if he’s going to sue Marina for slander?

The next day will start. You go to the law firm if you choose to go there. The law firm is at the shops street. Otherwise, you go directly to the café.

A. Priya… I understand your anger. But what’s important is that truth triumphs in the end, isn’t it? +
B. Priya… You have nothing to feel bad about. You did your job as a lawyer, with passion, as always. –

Marina: You think that… that Mr. Zaidi is going to sue me for slander?

A. Honestly, I have no idea. It’s his decision to make. /
B. No… I don’t think so. After all, he wanted to settle it by talking, at the outset. /
C. He’d definitely be entitled to, right? You mustn’t forget, he lost a lot because of this mess. /

You go back to the café. There you see Dambi. She tells you Hyun is in the kitchen. Go to the kitchen to talk with Hyun. After you talk with Hyun, you will get a phone call form Castiel. Then go back inside the café. There you will have a conversation with Nathaniel, Eric and Nina. Then you get to the end of the day. You can leave the café to go to the studio, but before you do so go back to the kitchen. There you will see the fairy. Her part cost 42 AP.  She will give you a chef’s hat.

Then go to the studio.

Castiel: What about you, (Nickname), don’t you have any ideas?

A. Maybe go for something in reference to Crowstorm? I don’t know… like “The Scarecrows”? –
B. What do you think of “Flock”? We keep the reference to birds, plus it sounds kind of like “Folk”. /
C. Wait… actually, why not keep Crowstorm? After all, it’s you, isn’t it? +

Castiel leaves the studio. Go after him.

Castiel: If there’s one person I definitely want to be on good terms with…

A. And if worst comes to worst, you survived all the rest, right? It’ll always be inspiring, even if there’s a price to pay. /
B. Look at the bright side: after this, nothing else can touch you. +
C. Maybe Priya can be diplomatic, if you ask her to be. After all, you are her client… –

Nathaniel and Rayan arrive you go all back inside.

Rayan: (Choice) (If you choose the content of B in the last choice)

A. As far as I’m concerned, I always thought it was pretty nice, but times have changed, Rayan. You have to adapt. –
B. Frankly, back then, I could’ve pressed charges against you, too. But not on such serious motive… +

Hyun: This pastry business was my dream, but it’s turning into a nightmare.

A. Hyun… I hate having to say this to you. But maybe it’s time for some damage control, huh? – with Hyun and – with your lover
B. Precisely. It’s just the beginning. Now is when you have to hang in there, Hyun! It’s like a test… + with Hyun, – with Rayan and / with you lover

The next day will start, you are back at the café.

Eric: There’s always a certain magic. Those times when, precisely, things are spontaneous…

Eric: (Choice) (You have to have a LOM of 25 or higher with Eric to get this choice)

A. Eric?! What in the world are you doing? I think there’s a misunderstanding… /
B. (And he was right, I wanted it, too. My lips moved towards his…) / (Illustration with Eric)

After the conversation with Eric, the episode will end.