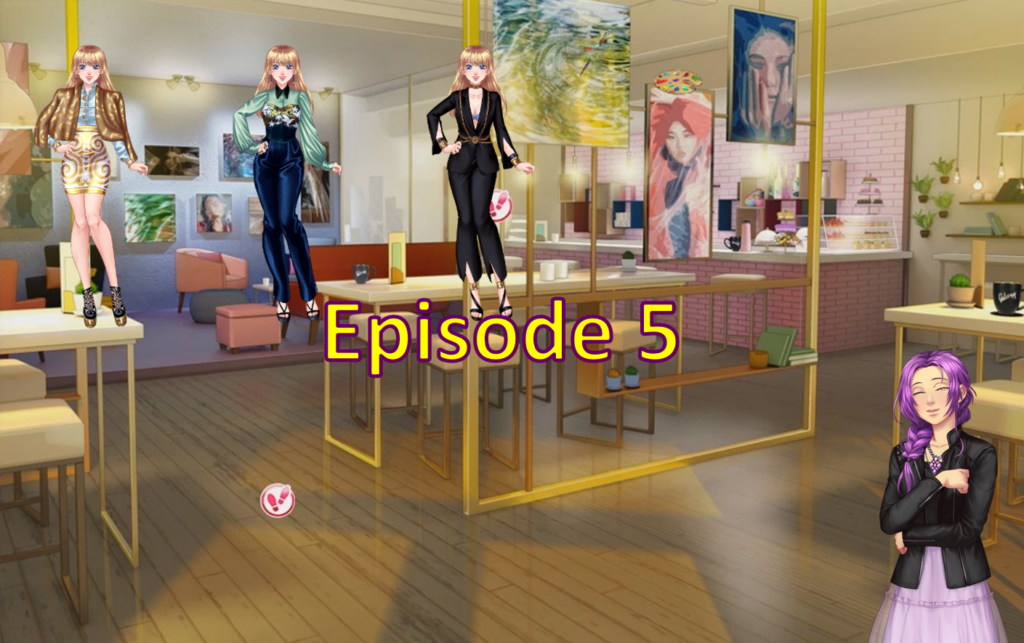 Illustrations: 5 in total. You can get one out of five in a single play through. The illustration depends on outfit & Dialogue.

Note: If you choose in episode 4 to say to Yael: You are strong most of the time, but you have to do it for those who aren’t strong enough yet! You will get a choice with Priya. This choice will have consequences for episode 6. I have put the outcome behind the choice.

Fairy/Auntie: in front of campus. You can find her before you go buying your outfit and after you saw Raphael at the cosy bear. She will give you a pallet. 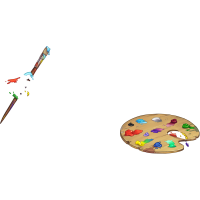 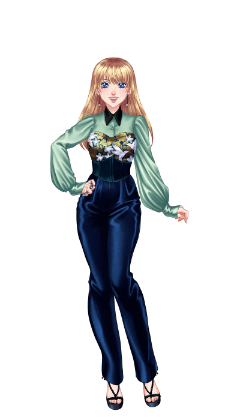 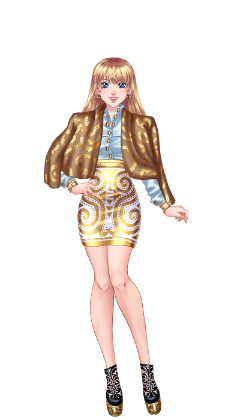 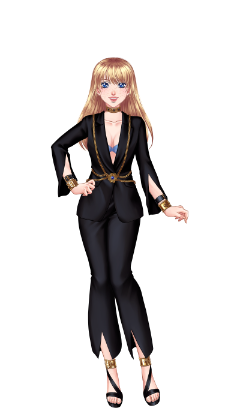 You start this episode in your house. Candy is telling about what is happened in the past two weeks time skip. And then you see your lover.

Hyun: Obviously, I’m not an artist. So, it’ll be a simplified version! (Only if you choose to say in episode 4 to Hyun: Yeah, it is best to remain realistic for now. But maybe later…)

A. I’m afraid the artist won’t like it if we reproduce one of his works on an edible cake… don’t you think so?
B. Oh, yes you are. Of course, you’re an artist. A honest-to-goodness pastry genius! It’s a wonderful idea. I love it! +

Nathaniel: Oh… you want me to come?

Nathaniel: Or worse, with loaded baby boomers explaining contemporary art to me… and life, in the bargain!

A. So just like that, you’re afraid of a few art lovers now…? A myth crumbles. +
B. But it’d really make me happy if you came. I want you by my side for the occasion.
C. I would’ve liked it, sure. But hey, I’m not going to force you.

Priya: So… it would be good if… I’d really like to talk to her. What about it? (If you choose to say in episode 4 to Yael: You are strong most of the time, but you have to do it for those who aren’t strong enough yet!)

Rayan: Sorry… A student a little nervous before turning in an assignment.

A. Hold on, how come she has your number? –
B. It’s all right, we’ve all been there. Even though not all of us dared to call the teacher at night… +

Castiel: Not to mention the videos that won’t fail to pop up… I’m not sure I want to re-ignite the controversy…

A. Since when do you care what other people think? Who are you…? +
B. I get it, but I would’ve liked to toast the gallery’s rescue with you. –

You will have a meeting with Hyun in the park to talk about business.

Hyun: So, what’d you say? Shall we shoot the video?

A. Oh, why not? It’s not as if the same thing that happened to Castiel would happen to me anyway. +
B. I’d rather not… when I see everything that’s happening to Castiel, it doesn’t really make me want to exhibit myself online. –

If you choose to shoot the video, Hyun will go with you to the café. Otherwise, you go alone to the café. After shooting the video or wants you got into the café, go to the kitchen. There you will see Nina. Then go back inside the café. Raphael will come over.
Then you decide that it is time to buy a new outfit.
But before you do that you can go in front of the campus to meet the fairy.
When you are on your way to Leigh’s shop, you will see Gabin.

Gabin: So, Leo and him went away for a two-week vacation. Kind of a little break…

A. Honestly, your buddy has gone too far, not answering him. Basically, for him, Twitter is right and Castiel is a thief! –
B. You’re right about Castiel. Even though he won’t ever show it, he must be pretty hurt that your buddy hasn’t called him. /

Gabin: I think he wants to talk to Castiel, but since the label has been suspicious, he’s afraid to come across as the black sheep.

A. No one’s asking him to leave the record company, huh, just to call a friend in turmoil. /
B. He’s not afraid of coming across as a fake friend in any case… while he’s away on vacation, Castiel is the one who’s catching hell. –

When you go into the shop Rosalya and Thia will be there.

Rosalya: Well anyway, I guess we’ll know when we need to know… but this silence doesn’t feel good…

Rosalya: But, passion, by nature, isn’t made to last…

A. He’s always been a romantic… /
B. You don’t think passion can last? Still, you and Leigh… /

Rosalya: Do you think I still look at him with the eyes of a high schooler who’s experiencing love at first sight?

A. I don’t agree! Look at me, we’re still passionate! /
B. True, looking at it that way, it would be pretty ridiculous. A couple changes and grows. +

Leigh: Hi (nickname). You OK? She didn’t bore you with too much psycho-blabla? I heard from a distance…

Then you get the time to choose your outfit.

After buying your outfit, you decide to go over to Castiel. On Castiel’s route you go home.

Castiel: (Nickname)! What’re you doing here? Did we have a date?

A. No, it’s just that… I dropped by to see how you were doing. I’m worried about you. –
B. Well, don’t you seem glad to see me, how nice… Is dropping by to see a friend not allowed anymore? +

Castiel: And you honestly believe that? I don’t know what to think anymore, personally… I just know that I’m fed up with it all.

A. We don’t all act the same way when we’re stressed out. Apparently, all he knows how to do is stick his head in the sand. +
B. I think Gabin is wrong about Zack. In my opinion, he’s just an opportunist. –

Castiel: Not to mention the videos that are sure to pop up… I’m not sure I want to start that up again…

A. Come on, Castiel… I would’ve really liked to celebrate the gallery’s rescue with all my friends. If you aren’t there, it won’t be the same… –
B. Since when do you care what other people think? Who are you…? +

You go home, the next day will start. You have to get to the café.
Nathaniel and Castiel will be there talking about the progress with the case.
After a while Eric comes inside.

Eric: My parents were on the road a lot, for work. They’re musicians.

A. It must not be easy to grow up without your parents at home… /
B. Musicians? I didn’t know that! It must be awesome having artistic parents. /

A. But I like it. It’s part of your charm! /
B. I’m not used to hearing people talk like that. I think it’s funny. +
C. Sometimes I could definitely use a translator to understand you. /

Eric: He doesn’t have a problem, does he? If that were the case, you know he can count on me…

A. No, no. I mean, not that I know of. But he told you what he was doing here, didn’t he? Something about an informant… That’s all I know, I just served them coffee. –
B. Can you keep a secret? It’s important… /

The auction will start.

Dan: A matter of principle, and elegance. You understand? (Only if you did do the video)

A. No problem. No more videos. I get it. I didn’t mean to upset you… It was just… +
B. Forgive me, but it seems to me that if I host the event, I should be free to do the advertising my way, right? –

Marina: (Choice) (only on Rayan’s route)

A. But Rayan’s right, nothing’s better than personal experience. So go look around inside.
B. So, this time, you won’t need to call at all hours for extra explanations… / with Marina and – with Rayan

Nathaniel: I guess human nature never changes much, regardless of the level of education, huh…  (only on Nathaniel’s route)

A. Nath! That’s enough. If you’re here to be rude to my guests, I definitely would’ve preferred for you to stay home!
B. Hm… He has a very acute sense of justice. That’s another reason I love him! +

Priya: Oh really, does she use an alias? What’s she go by? (only on Priya’s route)

A. She made me promise not to tell. She’s still shy, you know. +
B. She goes by Aster. You know, she’s the one who did that super Crowstorm painting. –

A. Ahem… Come on, darling. I absolutely have to show you Von Gothing’s work… inside. – with Priya and + with Dan
B. Dan, geez! I get it that you’re attracted to Priya… – with Dan and + with Priya

Castiel: What do think of that, (Nickname)? (only on Castiel’s route)

Castiel: (Choice)  (only on Hyun’s route)

Priya: So… it would be good if… I’d really like to talk to her. What about it? (If you choose to say in episode 4 to Yael: You are strong most of the time, but you have to do it for those who aren’t strong enough yet!) (Only on Castiel’s, Hyun’s, Nathaniel’s and Rayan’s route)

Alexy: Oh yeah, right! We’re at your place! How about buying me a drink?

Go with Alexy to the terrace.

Alexy: But I love him! Why didn’t he even listen to me…?

A. Relax, Alex. You’re in no state to think about all that, not now anyway… –
B. Don’t you have a vague idea why? Just as a reminder, you were not exactly… blameless. +

Alexy: Picture it, (nickname) … he’s already made a fresh start… Three years together, and he’s sleeping with another guy two weeks later.

A. Still, can you really blame him for wanting to get a fresh start? –
B. That doesn’t mean anything. He’s just a rebound, as they say. +

After calming down Alexy and cleaning the café, it is time to go home.

Hyun: His break-up with Morgan? He got what he deserved, didn’t he?

A. Right, for sure. I sugarcoated it, but that’s kind of what I tried to make him understand. + (illustration NSFW)
B. I don’t know… it’s a little more complicated than that. Morgan could’ve given him a second chance. –

Nathaniel: Good for Morgan if he’s enjoying himself. He deserves it. Honestly, Alexy screwed up pretty bad this time.

A. Obviously, I sugarcoated it, but that’s what I think, too, and I tried to make him understand. + (illustration NSFW)
B. True, but it’s still kind of hard, what he went through tonight. I mean… slip ups happen. –

Priya: That’s not what I said. I said he handled it badly.

A. Oh well, right, since after all, he did cheat on him! For sure, that’s not exactly handling it really well…
B. You think he should have told Morgan about Adrien sooner? + (illustration NSFW)

Rayan: And unfortunately, Morgan may be punishing two people for something that’s actually fairly minor.

A. I don’t know… In his shoes, could you forgive? + (Illustration NSFW)
B. Something actually fairly minor? If I were in Morgan’s shoes, I’d react like him! What Alex did is unforgivable. –

Castiel: Well, he totally asked for it. What he did was serious…

A. I think so, too. He doesn’t understand that there’s no more trust, and that it’s a big deal. + (illustration NSFW)
B. That’s true, but everyone makes mistakes, right?